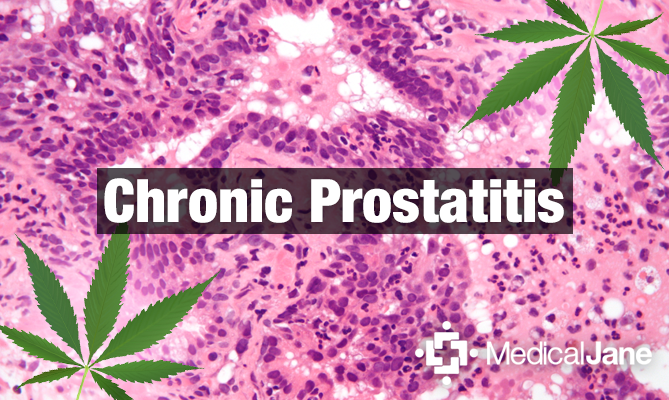 What is Chronic Prostatitis?

Chronic prostatitis is caused by inflammation of the prostate (a gland in a male’s body that releases fluids which aid in achieving sexual reproduction), which leads to long-lasting, lost-term pain in the pelvic region (e.g. around the penis, anus, lower abdomen, and lower back). There are two types, including:

Since infective/chronic bacterial prostatitis is caused by bacteria, the inflammation can be treated with medications like antibiotics, which kill bacteria (reduction of inflammation would also lead to decreased pain). However, the cause of inflammation in noninfective chronic prostatitis/chronic pelvic pain syndrome is often unknown (although theories exist), so the syndrome can be difficult to treat. Additionally, because the cause of chronic nonbacterial prostatitis is unknown, it may not technically be “prostatitis” (inflammation of the prostate). It is therefore sometimes referred to only as “chronic pelvic pain syndrome”.

Other symptoms of chronic prostatitis/chronic pelvic pain syndrome may include:

While there are many options available for management (e.g. prescribed medications like opioids, heat therapy and alternative treatments, certain food restrictions, sexual activityrecommendations, surgery options), they are sometimes ineffective in fully managing patient discomfort, or inaccessible to those without reasonable health insurance. Chronic prostatitis/chronic pelvic pain syndrome  can be experienced by males at any age, but is mostcommon in those 30 to 50 years old.  While females can also experience chronic pelvic pain, the cause is different, as they do not have prostates.

A survey study published on December 2014 in the Canadian Urological Association Journal recently found that over half of the participants with chronic prostatitis/chronic pelvic pain syndrome reported cannabis use, and approximately 61% of those users reported improvement in symptoms as a result of use.

The researchers surveyed participants either in the clinic (49 Canadian residents) or online (89 residents, mostly from the United States residents), and found:

This information adds to a large collection of evidence showing that cannabis use may be effective for the management of pain, mood, muscle spasms, and sleep. Additionally, evidence shows the potential utility of cannabis and cannabinoids as anti-inflammatory agents.

“Evidence shows the potential utility of cannabis and cannabinoids as anti-inflammatory agents.”

While self-reports have significant weaknesses that limit the ability to use them as accurate, reliable information according to scientific standards, they should not be discounted by healthcare professionals, especially given that patient stories/self-reports are often used as the “real world” gauge of treatment effectiveness in the clinic for symptoms like pain.

Given that (1) opioid prescription is a pain management option for patients with chronic prostatitis/chronic pelvic pain syndrome, (3) use of opioids can lead to severe negative side effects, abuse, dependence, and death, and (3) cannabis use may be able to partially (as an add-on therapy) or fully replace opioid use in some instances, patients may benefit from access to alternative, safe pain management options like whole-plant cannabis.

Increased research will help to assess whether or not whole-plant cannabis use is an effective treatment option for chronic prostatitis/chronic pelvic pain syndrome.